I’M TOLD A GOOD BRICKLAYER can lay 750 bricks in a day. And, since bricklayers are often paid by the brick and since bricks last a very long time, you can tell a surprising amount about a place by looking at bricks. Along with waterways, road conditions, visible electrical infrastructure, footwear, the ratio of bicycles to mopeds to motorcycles to automobiles, bricks are one of a few barometers of social health I look at when I travel to new markets. But unlike these other, more transient data points, what bricks have to say is frozen in time. It’s a reflection of that society when the bricks were laid. So as conditions change, brickwork provides a record of change that can be handy and illuminating.

These bricks, for example, were made and laid during China’s Cultural Revolution (1966­–76). I took this picture in a small, poor village in Guangxi Provence. There’s no mortar. They’re not fired—the straw holding the clay together is still visible—and they’re eroding in the rain. 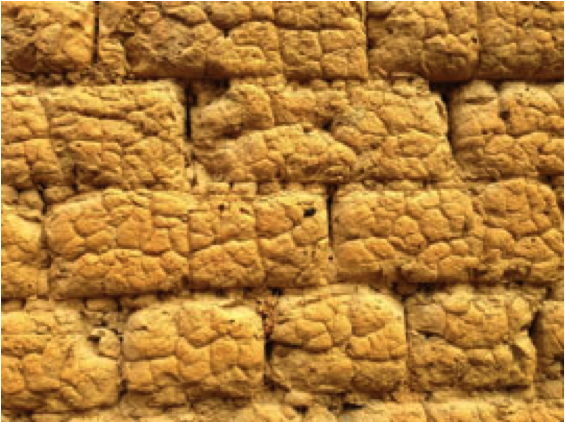 They reinforce that China passed through a period of difficult poverty and tell a story about what it was like during a particular moment in time. They tell this story in a very human dimension. Each of these bricks is about the size you’d expect them to be—a little bigger than your hand. So bricks also serve as handprints, in a way; visible reminders of the hands of the now-invisible workers who laid them in that row, at that place, on that day.

The bricks of China’s Great Wall tell a different story. At approximately 13,000 miles in length >, while the Great Wall may or may not be visible from space > that hardly matters to anyone who’s been there. What is so mightily impressive is how out of scale the Great Wall is relative to the people who built it. The Great Wall stretches along the sharp back of a mountain range for much of its journey. Every brick had to be carried up the steep hillside to be placed. And despite this, the Great Wall is far too high to climb and wide enough on top for a substantial military force to live.

In this photo, you can see one of the defensive garrisons with the Great Wall receding into the distance: 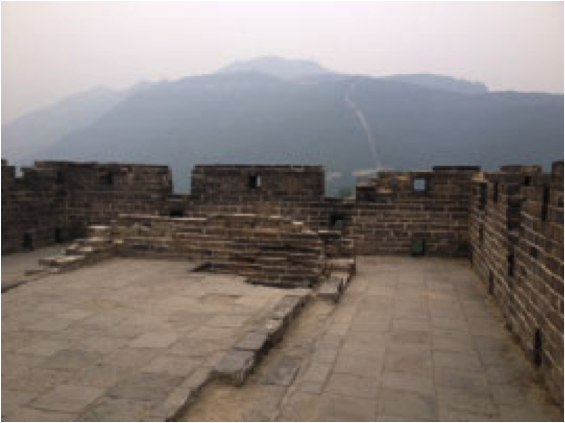 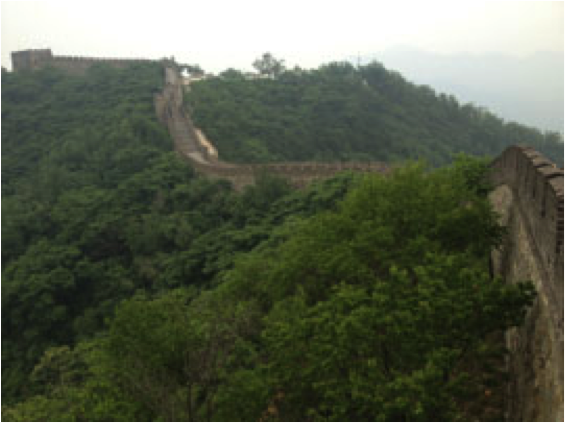 The calm, purposeful might of these structures is singularly impressive. While the Mao-era yellow bricks tell the story of peasant survival, these bricks tell the story of organized, systematic work over a staggering distance—the Great Wall’s longer than the diameter of the Earth by five thousand miles—and a staggering amount of time—between about 500 BC and 1600 AD. The Great Wall hints at, but never completely yields, something far more poignant. Just as the yellow bricks serve as a handprint in the humble story of a difficult historical moment, the Great Wall challenges one to imagine the tens or hundreds of thousands of hands that quarried, roughed, shaped, carried and placed these millions of bricks along the mountain ridge.

Bricks can also tell a much more personal, dramatic and aesthetic story. One of my favorite examples is the Minar Tower (one suspects nobody would dare call this a minaret) in Delhi’s Quwwatulislam Masjid. Begun in 1193, it is the earliest mosque in India. And as the person at the base shows for scale, it’s a massive, imposing structure. So much so that it’s very easy to miss the careful, delicate beauty of the tower’s brickwork. One sees the mosaic effect of the different stones, but it’s easy to miss the detail for the effect—and to miss the story for the detail. More than 1,000 years ago, individual craftsmen laid these stones, one upon another. Fifty generations later, the product of the sweat of their brow on that day still stands. 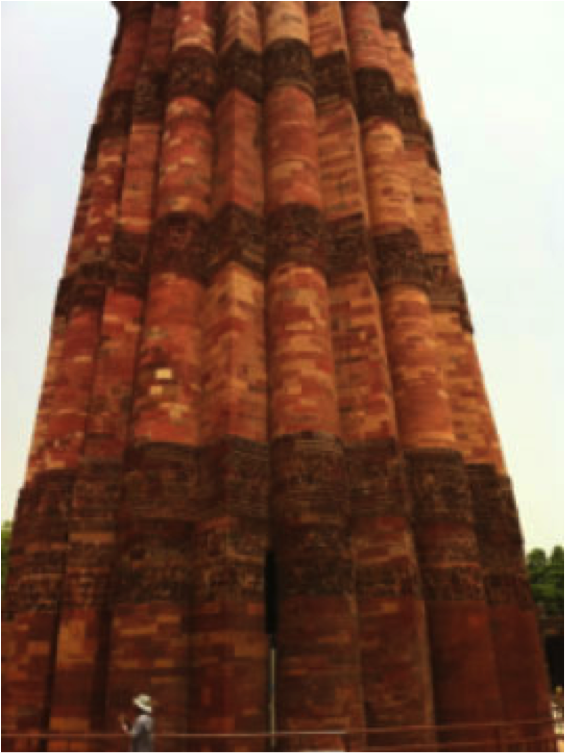 But what do bricks and brickwork tell us about today’s world? Again, quite a lot. Look at these two brickpiles. 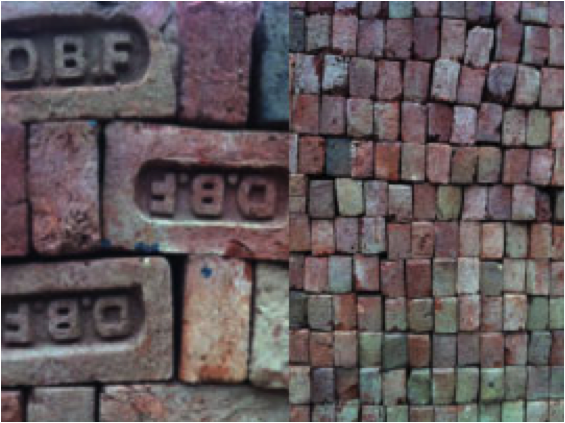 What jumps out at you? Probably the brickmaker’s brand. While bricks are a commodity in most markets, these are from D.B.F. brickworks in Uttar Pradesh, India, far on the outskirts of Dehli. It’s often surprising how many Indian billboards advertise materials manufacturers, from cement and iron to bricks. But it’s an important reminder of the importance of brands as signifiers of value and trustworthiness. Watch the papers for more than a week and you’ll likely see a story about a building collapse somewhere in India.This one, in Hyderabad, killed 6 and injured 28 >. “Substandard materials” and age were cited as contributing factors. Which brings us back to these brick piles. Look again—you’ll see they’re used. They’ve been cleaned and sorted, but some are dented, some are cracked, and some are misshapen.

They’ll be used to build walls like this one: 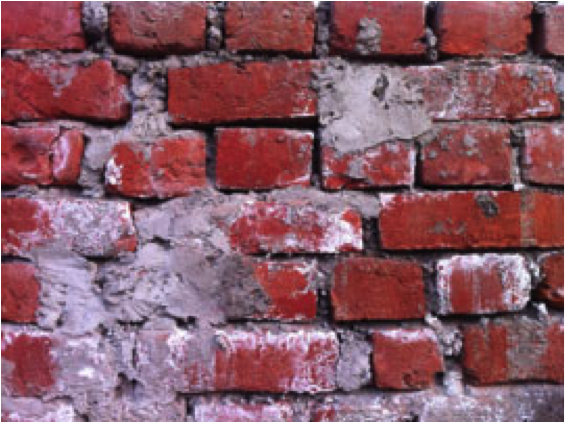 The bricks here are fine but the brickwork is imprecise, sloppy, haphazard. The bricklayer was poorly trained in his craft if he was trained at all—but it’s a fair guess that he’s being paid by the brick or the brickload. How does he get away with such inferior work? Because the brickwork will soon be covered by a layer of stucco and a faux wall implying robust stonework will cover the mess like a blanket. 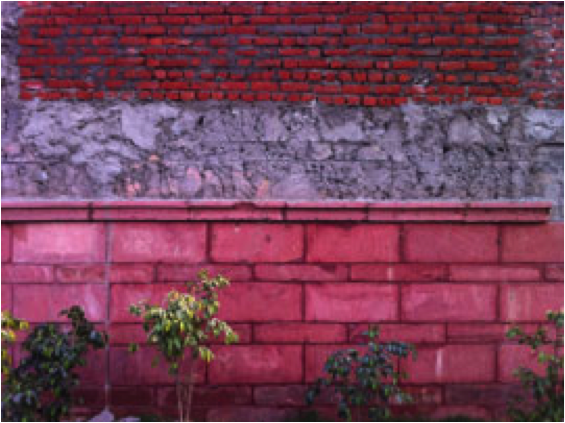 The contrast between the brickwork in the Minar Tower and this New Dehli office complex is stark but no more so than the contrast between the Mao-era bricks and the brickwork of the Great Wall. In both cases, both in countries of deeply established cultures undergoing rapid economic change, it simply points out how much observing something as simple as bricks can yield.

There’s a more subtle social message here, too, about the dignity of work and the importance of how members of a team, a company, a city, even a society decide to work. In this example of brickwork, the anonymous bricklayer literally has the lives of strangers in his hands with every brick. It’s an awesome responsibility, and some take it very seriously indeed. This lovely brickwork is an inner wall from Evviva Brands’ first San Francisco office. The five-story building was built in 1905 of unreinforced masonry (brickwork) and was one of the brick buildings that survived the San Francisco Earthquake of April 12, 1906. 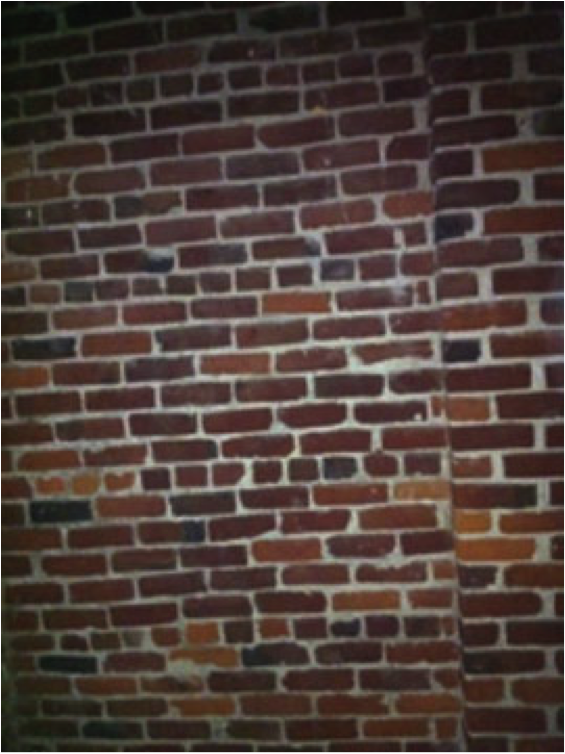 Who laid these bricks? An anonymous mason with a high regard for his craft. Notice, for example, how every seventh row looks different. Rather than laying every course of bricks lengthwise (stretchers), the bricklayer has inserted a row of headers. This keys the visible course of bricks to the course behind it. (You’ll notice that the Dehli bricklayer has also varied the pattern of his brickwork but it’s haphazard, not planful.)

What’s noteworthy about this wall is that it was designed to be covered. The bricklayer could have been as sloppy and imprecise as he (or she) wanted to but had too high a regard for craftsmanship to be sloppy even when it didn’t matter at all. As a result, this building survived a massive earthquake more than a century ago and still stands despite its advancing years.

In all of these walls, then, there’s a story written in stone by people whose work is simultaneously visible and invisible, essential and forgettable. It’s a story by an anonymous author that nevertheless has a great deal to offer about a particular person on a particular day and about the world in which he lived. Like all anonymous works, the questions it raises are simple and profound: Can we see it at all? And will we bother to read it if we do?

You are using an outdated browser. You can update it on this page.